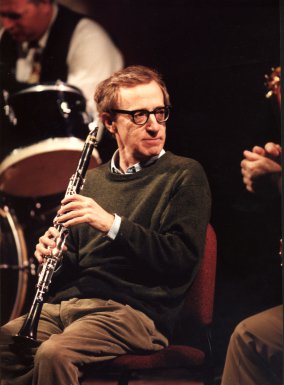 For more than thirty-five years, Woody Allen and His New Orleans Jazz Band have been delighting audiences with a hot mix of New Orleans inspired music. The band’s sound is firmly rooted in the music that Woody Allen has loved since his childhood and draws inspiration from such legendary artists as Sidney Bechet, George Lewis, Johnny Dodds, Jimmie Noone and of course, Louis Armstrong.

Their repertoire consists of over 1200 songs and comprises a diverse collection of early 20th century popular tunes, hymns, spirituals, marches, blues and rags. In keeping with the spontaneous nature of the music every performance is an energetic collection of improvisations—there is no play list, nor do the musicians know what song Allen, in collaboration with band director Eddy Davis, will call out next.

Beginning as informal jam sessions and then becoming regular concerts every Monday night, the band has performed for thousands of New Yorkers and visitors from all over the world. For the last decade, the group has been regularly playing once a week at the Manhattan landmark hotel, The Carlyle. Allen even missed accepting an Academy Award for ( ) so as not to miss his Monday night gig.

In 1996, the band embarked on its first tour of Europe and was chronicled in the documentary film, “Wild Man Blues” and subsequent compact disc titled under the same. Since then, the band has returned to Europe on numerous occasions, most recently performing in Greece and Turkey.

This is the group’s first multi-city tour of California and Florida and they are pleased to bring their brand of New Orleans jazz to American audiences.