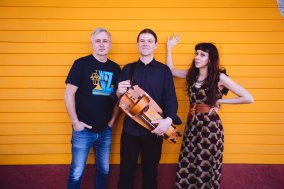 What happens if traditional Auvergne music meets Mississippi hill country blues? It is worth asking a trio of musicians from France : Tia Gouttebel, a blues singer-guitarist, Marco Glomeau a percussionist specialized in Latin rhythms, and Gilles Chabenat, a hurdy-gurdy player expert in traditional music from Auvergne, France. At first sight, these three should have never met. The blues brought them together. In 2017, the trio set off to record their first album in northern Mississippi. It was a kind of initiatory journey into the « hill country » where kudzu and a form of hypnotic blues once sung by Fred McDowell, Jessie Mae Hemphill, Junior Kimbrough and RL Burnside are well known.
Their second album « Homecoming » was recorded this time in the Auvergne area as a pagan pilgrimage back to their roots. In a barn, in chapels, in the former ballroom of a mountain bistro or with torches in the middle of the night in the crater of a volcano. Homecoming accompanies –and illustrates– a reflection on the similarities between rural music from around the world, but also on the Creole identity, on modernity and the modernization of cultural traditions.

Muddy Gurdy plays with correspondences, with crossroads between territories, landscapes, times, places, people. The three artists create their own world. At this level of correspondence, some would call it transcendence.

- Selected for the Folk Alliance Festival in New Orleans in January 2020. 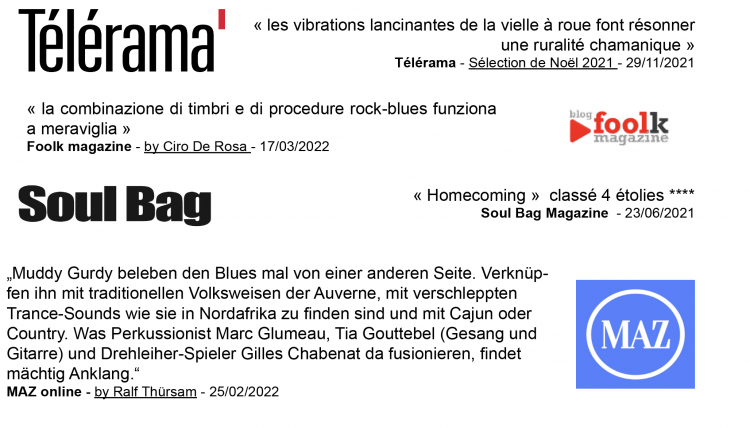 Past dates (current year only)