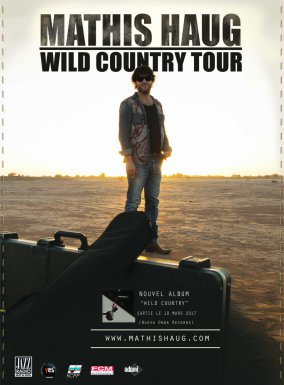 The path I took

Wrote its own book

The reader and the writer

They are nearly the same

So goes one of the verses of Mathis Haug’s “Wild Country.” Those lines sum up the philosophy of an artist whose vision of life is nourished by the notion that we exist through the eyes of others, and vice versa. In simple terms, Mathis advocates creolization as a source of creation.

In this time of environmental and social crisis, Mathis questions our lifestyle in a luminous and falsely naïve way: he describes the destiny of migrants in “Luigi” (a composition he sings in German, his mother tongue) without a trace of nostalgia or pathos; dissects our desire to reinvent ourselves in “Jimmy the Harp;” denounces the diktats of capitalism in “Big Machine;” dreams of new ideals in “Rock ‘n’ Roll Band;” and even falls under the spell of the love ballad tradition in his poetic rendering of a “Still Life with Smile.”

“My songs talk about environmental issues, the evolution of Western society, migration in the wider frame of globalization, the emerging dictatorship of robots. Basically, I ask what kind of planet we want to leave to our children.”

But Mathis isn’t content with asking. The alarming assessment of human greed and blindness he makes in “Selling Out” is essentially a way of awakening consciences. So is his reworking of “Keep Your Eyes on the Prize”: this century old spiritual, already embraced by the African-American community during the Civil Rights era, finds a new life with its cathartic verses describing the evils of today.