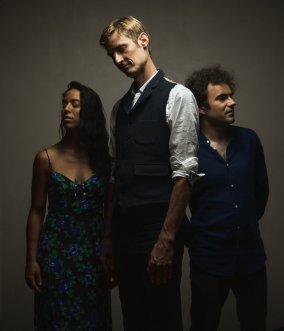 Goodbye Jupiter or the alliance of three classical music enthusiasts around a minimalist and dreamlike style.

The group was formed in 2019, under the impulse of Guilhem Kaltenbach. It was one evening, as he was leaving the cinema, that pianist Guilhem Kaltenbach composed for strings what would become the first piece of his future trio. He was introduced to the piano at the age of 6 and continued his training in various conservatories. He has been improvising on the piano since his teens, and is training to compose by combining his theoretical knowledge with his musical intuition.


Hannah Al-Kharusy, a cellist from Michigan, learned her scales and arpeggios in the prestigious Grand Valley State University orchestra as first cellist.
An eclectic performer with a powerful, rich and sensitive sound, she now plays in a variety of groups ranging from folk (in a duo with Canadian guitarist Shaun Ferguson or Mostly Noise) to live performance (with the contemporary circus company "les mains sales").

Arnaud Bonnet, an experienced violinist, is originally from the Toulouse region and trained at the Toulouse Conservatory. At the end of his studies, he gave over 300 concerts in France and abroad with the Toulouse Chamber Orchestra. A great lover of the stage, he participated in the Folles Journées de Nantes and La Roque d'Anthéron festivals, as well as in tours of Spain, Morocco and Brazil.
Today he sails his violin from Tango Volta to the assumed minimalism of Goodbye Jupiter with the same joy.

The trio now plays a music where the bare bones become light. The depth of the strings' sound, their way of accompanying silence, the delicacy of the playing: starting with the minimum, keeping only the essential, suggesting emotion without emphasis.

Beauty taken from the heart, a minimal beat becoming music.